As you know I bake regularly for a cafe in Tramore. We decided to try muffins as an addition to the menu.  I  then had the happy task of trying some flavours out to the critics at home.

I was going with sweet as opposed to savoury muffins, and tried three flavours (drumroll please….)

I debated before- (mostly with myself) what the differences are between a cup cake and a muffin.  For me- it’s two things- I don’t believe that a muffin needs icing.  Whereas a cupcake looks unfinished if not iced. The other is the texture and taste, the cupcake is just a miniature cake, whereas the muffin is not so refined, generally not as sweet and often flavoured with fruit.

First up was the Blueberry And Chia Seed Muffins

This baby is just belting out the healthy eating vibes.  Chia seeds are the buzz food of 2016, and add a nice topping and texture to the antioxidant busting blueberries in the mix.

This took a little longer to make, peeling apples is a pet hate of mine.  But I got through it- thanks for the concern. These ones had no specific topping, so I dusted them with some icing sugar.

And last but not least-

These muffins were nearly too light in texture, which was odd really, as banana tends to make bakes a little soggy. 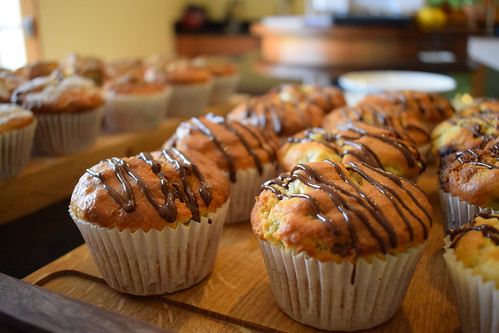 Tasting went according to plan, and was civilised for a change. As usual we all had differing favourites.  ME? I think the banana and chocolate is a smidgeon ahead of the apple and raisin.  But really, I’d eat any of them.  Might try savoury ones next….