The earliest mentions of pancakes being eaten regularly the day before Lent is in the 15th Century, these “pancakes” were thicker than our modern nod to the French crepe.  It was around the 18th Century that the pancakes became thinner, under the influence of French cooking, that was becoming popular at the time.

The ingredients involved in the pancake making represented four pillars of the Christian faith — eggs for creation, flour as the mainstay of the human diet, salt for wholesomeness and milk for purity.  The term “shrove” comes from an old English verb “shrive,” meaning “confess all sins,” it was seen as the last opportunity for religious observers to indulge themselves before giving up food for Lent. Pancakes were adopted as the Shrove Tuesday food of choice because they contain many of the things that were forbidden during Lent, including butter, fat and eggs.  Often the first three pancakes  would be marked with the sign of the cross then sprinkled with salt to ward off evil.  These would then be set aside.  The eldest unmarried girl in the family would be let toss the first pancake.  Success meaning she would be married within the year.

What was interesting to me was the similar “day” elsewhere in the world. In Finland the day is called laskiainen and is generally celebrated by eating green pea soup and a pastry called laskiaispulla (sweet bread filled with whipped cream and jam or almond paste).

And in Iceland the day is known as Sprengidagur (Bursting Day) and is marked by eating salted meat and peas! Think I will stick to the pancakes!

What pancakes did I make yesterday?  Only one type for a change.  Salted caramel ones.  Divine.  Seriously. 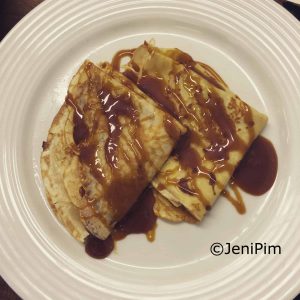