They say an army marches on it’s stomach. Well, I’m not sure about an army, but I certainly do.  But sometimes when I get up early I’m not really in the hungry phase, and breakfast seems an effort. And if you don’t have time to make the whole scrambled eggs or french toast buffet selection, then porridge is the go to option.

When we are in “school” mode, porridge is the constant in my life.  I am lucky to have married into a family where the males in the household make the breakfast, saying that, my Dad always use to make the breakfast when I was growing up too. I use to have a sign over my bed… “many are called but few get up”

We live near Kilmacthomas, where Flavahan’s porridge is produced, and have used it for as long as I can remember. As it’s organic porridge I feel I am not only doing good for bodies, but also I believe that having an organic crop growing locally is the best possible scenerio for our local environment. 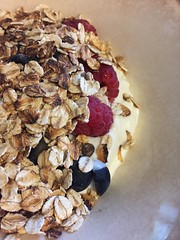 After porridge I would have difficulty choosing my next choice for breakfast.  Somedays it’s pancakes, some days it’s french toast.  Mushrooms on sourdough toast are a winner, but take a bit of planning. 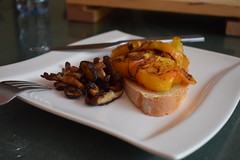 Scrambled eggs on toast are a weekend family favourite, often with a sneaky piece of streaky bacon.

My go to when there’s not a huge amount in the fridge, but I want something different is-

Boiled egg and toast.  A classic. Welcome for not only breakfast, but often consumed at any hour of the day or night- when required! 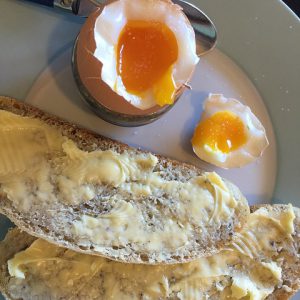 But let’s go back to French Toast.  It can be made with a myriad of bread.  But for me personally? Brioche.  Hands down. I try to make the brioche on the Saturday, and then revel in the French toast making the next day.

And with my breakfast? The obligatory cup of tea, or should I say pot of tea. I start and finish my day with tea.  From the same pot.  I’m also *slightly addicted to milk jugs.  Mini ones.  And I love to have my milk in a jug.  Yes- I’m old- no- I don’t care. But that’s another post.