Apple Trees were once one of the seven “nobles” of the woods, as taught through Brehon law.  Apple pips, most probably from crab apples (wild Irish crab apple Malus Sylvestris), having been excavated in Co Meath and carbon dated as 5000 years old. There seems to have been approx 70 varieties of Irish Apple, including, Maidens Blush, Buttermilk Russet, Bloody Butcher, Greasy Pippin, Lady’s Finger of Offaly.  For most users, apples are divided into three main categories, dessert (eating), cooking and cider making.  We are using eating and cooking apples to make our cider.  There are some old and some “newer” varieties.  As for cider making itself? Old Irish texts are so far somewhat silent on the matter of cider-making, although the first definite mention appears in the 12th century when a tribal leader from Ulster is praised for the cider he made from the produce of his orchards. As with many other traditions, the famine wiped out alot of the then cider makers.  After a while such few presses made it un-economical to make, as farmers had to travel with their apple crops.  Only more recently has the art of cider-making again become popular. ( Cider Ireland)

We have to wait until the early modern period and the 17th,18th, and 19th centuries before the discussion of cider-making in Ireland becomes commonplace among writers of the time.

Cider Making in this house has started in earnest.  “We” have been dabbling in it the last number of years.  It’s really Nigel’s baby.  But we all chip in with the apple picking, and of course advice! The apple press FINALLY arrived, so we are READY.  The cider-making really came about

Course, the next most important thing is APPLES!

Once the press is assembled, the apples are crushed to make them easier to press for juice.

Then this is pressed through a fine mesh.  And then its onto the next stage…

but in the meantime we just make some apple juice for breakfast, we do pasteurise it and also sterilise the bottles, to be sure, to be sure! 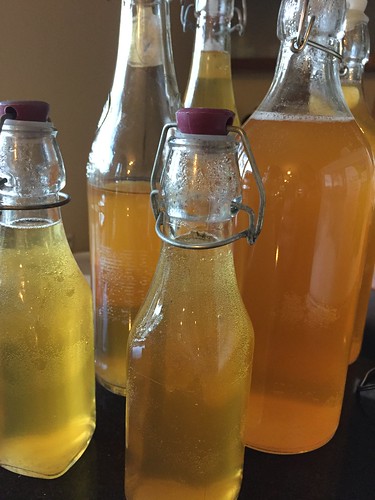 It’s not then a million steps into this stage, I love the sound of the gentle blurping that accompanies the faint angels share of cider in my utility room.  Just a little addition of yeast and sugar, with some gentle warming.

After about three weeks, once the liquor starts to clear, we then bottle it.  This bit is still a work in progress.  Trying to find the best way to filter it is not the easiest.  We’ve tried “jelly bags” and coffee filters.  Ultimately we want a really clear cider.

And now it sits again, and we wait to taste.