Sage UKI had invited myself and Nigel to London for their Gala Dinner in February.  Unfortunately it clashed with our eldest son’s mocks which meant only one of us could go.  My better half suggested I went as I would be in the UK later that week for a course anyway.

I arrived in London by train to Piccadilly.  I have to say that the rail system in the UK is really excellent.  I was even able to charge my phone.

The hotel I was staying in was the Jumeirah Carlton Tower Hotel in Knightsbridge.  I arrived by tube and emerged beside Harvey Nichols.  What a start.  I felt awfully scruffy passing by the most impressive of labels on the way to the hotel.

The hotel reception was quite busy, but a warm towel served with an orchid is always guaranteed to make you feel better! My room was on the 17th floor overlooking Cadogan Gardens.  The room was very nice but the view was stunning.  I had wanted to get to the hotel to settle in before the conference started downstairs, so had not had lunch.  Room service sandwich was going to be  £19. So I went to the Harrod’s foodhall (massive fan) and picked up a warm roast beef sandwich for £6.

The Sage conference started with some nibbles, which were lovely.  There were any amount of staff on hand in the hotel to serve tea/coffee.  It was lovely to meet the always smiling Karina from Sage at that stage.  Although everybody was arriving at the same time for registration, both Karina and Elaine (Sage UK) were very welcoming and calm!

I sat with the other Business Partners from Ireland, and we listened to a number of presentations from Brendan Flattery, Steve Atwell, Michele Gettins and David Pattinson.  All were good speakers and relayed their message effectively. A goodie bag with a memory stick which had all the presentations on it was included.  This is a great idea as there are only so many notes you can take.

The Guest Speaker was Mark Gallagher.  Although the talk was quite long, he was very entertaining.  I, myself, am not a huge Formula 1 fan, but his insight into how their market has changed over the years was fascinating, and he made good business sense that I felt most people in the room could relate to.  The most interesting part of his talk though was the last 10 minutes or so.  Who knew Pit stops could be so riveting, we were only dying to see the video clip of the pit stop that took 1.92 secs!

Onwards to the gala dinner, it is traditionally a secret venue until the day but Steve had mentioned at the start of his talk that we would be mixing with the rich and famous, so I had it in my head it would be Madame Tussauds, and I was right.

We arrived by bus and were ushered onto the “Taxi” ride, bringing you through a tableau of London’s History.

Then off to one of the floors to sample some canapés and prosecco. The Canapés were exceptionally good, my personal favourite was the carpaccio of beef.

We had great fun in this room getting our photo with all the “celebs”. 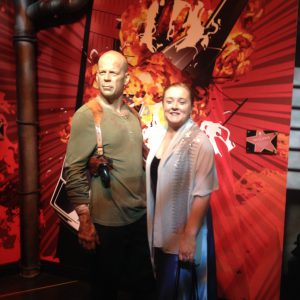 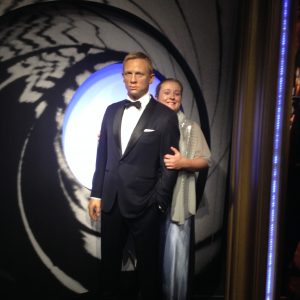 And even pics of “just” us.

The room was set up beautifully downstairs (note to self- less heel next time).

The awards were held before the meal, and the applause was loud and racous for all.  Many congratulations for those who were nominated (US!) and those that won (not us- next year!).

Then the most important part of the evening.  Food.

We started with a goats cheese salad, I was starving and wolfed it down, there was a nice chutney also, plum I imagine.  It would have been nice to see a menu, if only to congratulate the food producers on their products.

Next on the menu was the beef main course.  A lovely lady on the table was vegetarian and we “think” it was aubergine, but in the darkly lit room it was kind of difficult to see. 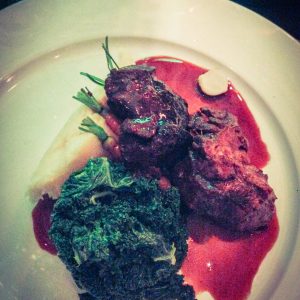 The beef was very tender but some comments from our table was that it was a little fatty.  Mine was lovely although too big a portion.  The kale was beautifully cooked and went very well with the beef, which I think must have been featherblade. Credit to Karina for the photo, mine was FAR too dark.

Finally a chocolate fondant appeared, which for me made it a perfect ending.  No picture would do it justice, as by this stage the room was just too dark.  Huge credit to the caterers, as I’m quite sure they had to assemble a kitchen somewhere for this event, and perfect fondant for that many people is no mean feat. I was unsure if I was getting dessert though, as at one stage a plate was put in front of me, and as I politely waited for the rest of the table to be served, it was whipped away to another table! Thankfully, it was replaced.

The band were excellent, the lead singer obviously loved himself and put on a great show.  We danced for hours before this Cinderella got a taxi home.

The hotel turn down service meant I was met with soft music and a warm bed to which I gratefully rested my weary head….