We spent a lovely day Sunday cooking for the family coming for dinner that night.  The theme was Halloween, and our youngest spent ages putting up the decorations. 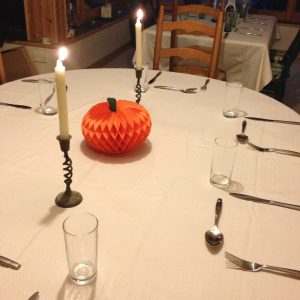 The menu was supposed to start with some homemade spinach and ricotta ravioli, but we decided that everyone would just be too full, so they will wait for another evening.  (and you’ll have to wait for those pictures..)

So, no starter, straight into

My sister in law made a fabulous lentil curry for the vegetarians at the table. 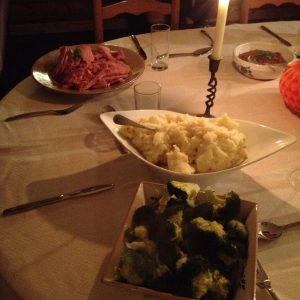 The dessert was always going to be the main event.

Part of the decorations were eyeball cake pops, fun to make, but next time I’ll make them a little smaller, for ease of handling.

I had to make a chocolate fudge cake, no hardship in that, but used Greek yoghurt instead of sour cream, just because it was handy.

The icing on the cake was just a whipped ganache.

The decorations were piped tempered chocolate, and sugar paste coloured accordingly whether it was for the moon or the pumpkins.

Assembly was a little touch and go as the kitchen had got quite warm, but I think you’ll agree, the finished article is quite impressive.