We often play- where would you go if you won the lotto- and it’s amazing what different people look for in a holiday. The eldest often talks about Iceland, which is my fault really as I made the family watch Walter Mitty.

And while at a family party, we borrowed a copy of their Lonely Planet  1000 Ultimate Experiences.  And as we sat flicking through the different sections- from food markets to thrill seekers, we wondered where we’d go.  I’m not really into sun, but don’t necessarily want it to rain either, and probably the best way to decide where to go, would be to decide where you wouldn’t want to go first!

For various reasons India, Thailand and China would be out for me.  And I think at my age I’m definite about that!  A tour of South America might be an idea, but I’m not 100% gone on the idea of altitude with my asthma. Coumshingaun is often a challenge even on a good day.

Then you look at those typical pictures of deserted beaches…

But there’s only so many sandcastles one can make.  I’m also not a fan of sea swimming. ( You’re never sure what’s under there!)  And at the risk of sounding like a complete moan, I don’t want to spend all day flying- so Oz is most probably out.

I watched a tourist programme once on the TV about visiting the Galapagos Islands, being a Darwin enthusiast, but I’m thinking there’s quite a lot of travel involved there too!  Advertising definitely works on me, who doesn’t want to visit the Rockies after seeing this advert?  And if you don’t go somewhere by train- then why not be car- the whole Route 66 is not to be missed I’d say! 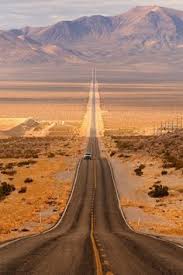 Mind you, it just goes to show exactly how bad my geography is, when I was looking up images of Route 66 for this post I realised that the road trip itself is not all on the coast!

America does have lots of options, and not only for the New Yorkites.  I have been a fan of some American TV, Greys, Bones, Alcatraz- and the lure of those cities appeal to me.  And those I’ve seen in Films- Seattle, Washington etc.  And Florida has been on the most wanted for quite some time as we rather enjoy ye old theme parks!  not cool I know, but that’s the truth!

Then there’s Europe.  We once had the privilege of sitting out in Frascati, drinking copious amounts of wine, while eating pork belly, and felt it couldn’t get any better.  And it might be best to remember it like it was.  The same could be said of our trips to France, I’d love to go back to so many of the wonderful places we’ve visited, not least for the food…

So where would you like to go?  For me the essentials are

And without going anywhere, I have three out of four.  I’ll wait for the rest, but still planning and dreaming is half the fun.