Italian Biscuits- to have with a nice strong coffee, or tea.. - Jen's Kitchen

Or just to nibble. Who doesn’t love a nice cuppa with a little something on the side.. and the sound of Italian Biscuits is so alluring.

There’s always either egg yolks or egg whites in the fridge. And these biscuits use up egg whites not destined for macaron, or meringue. A biscuit can be several different things depending on which side of the oceans you are on.  In America, when I visited New Orleans, a biscuit was a kind of what we would call a scone.  Mind you they serve them with gravy.  Yes, *sigh* I didn’t really get my head around it either.

What is really interesting is that in her book “English Bread and Yeast Cookery”, Elizabeth David had a section on soft biscuits in which she writes…

“It is interesting that these soft biscuits (such as scones) are common to Scotland and Guernsey, and that the term biscuit as applied to a soft product was retained in these places, and in America, whereas in England it has completely died out.“

These “new” biscuits, were hard, flat and unleavened. In some parts of Europe they were baked twice, like the Italian biscuits called biscotti served in cafes across Italy. But all were used as a dry form of food that was easily carried. By the 7th century AD this was changing. The sweetness of a biscuit was much desired.

Fast forward to my recipe for today.

Butter for greasing the baking tray

Mix the ground almonds and icing sugar together, add in the honey and the egg whites.  Mix this together until you have a smooth dough.  Leave to chill in the fridge for at least an hour.

Preheat your oven to 150oC.  Prepare your baking trays.

Divide the dough into four and roll each piece to a rough sausage shape. Slice each of these rolls into about ten pieces and place on the trays.  I used the end of a small butter knife to make an indent in each biscuit.  Being careful not to go straight through to the tray.

Add some jam or something sweet that you might have into the dent.  I used some salted caramel spread in some, and some raspberry curd in others.  It was suggested that nutella might also be acceptable! But I’m not a nutella fan.

Now comes the tricky bit.  Bake for around 15 minutes. They will still be soft coming out of the oven, but once rested they will slide off the trays to cool. They need to be coloured on top. 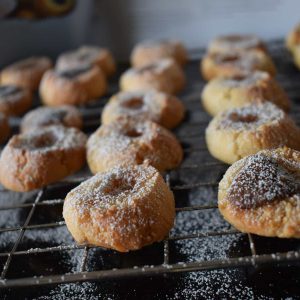