Having visited the Cake and Bake show a number of years ago in London, I was anxious to return.  The theme of the cake competition that year was futuristic wedding cakes.  And genuinely hand on heart they were epic.  Tradeshows are good places to pick up tips, unusual items of equipment and generally see what’s trending.

With various dates that didn’t suit the travels, we ended up linking the trip to the patisserie course I would be doing in Bath with Will Torrent.  We got the boat from Dublin to Holyhead.  The crossing wasn’t the best, but is relatively short.  And we were travelling in November after all.  But we were late docking which meant we didn’t get to Manchester until 3am, which made for an interesting journey especially with all the diversions.

Roadworks seemed to be the theme for the weekend.  We were staying in a hotel deliberately picked as it was only 5 minutes from car to the Trafford centre where the event was on.  And really, a Saturday getting closer to Christmas isn’t entirely the best time to be visiting an area that contains one of the biggest shopping centres in England. It took us an hour to get there.  At one stage my normally sane GPS took us off the bumper to bumper carpark that was the motorway, only to take us right back on again.  So we took our own route, and got to sit, in the car looking at the wonderful canals.  And, yes the streets look like they are STRAIGHT out of Coronation Street.

Anyway, we got there.   Was it worthwhile? Kind of. I got a spray painting machine that I’d been looking at for some time, and was delighted with the offer.  The cake competition was “fairy tales”, and some were truly magnificent.  Not sure how some of them would taste though.  We were so late, we missed our booked masterclass, but the rooms were so packed anyway I’m not sure how much I would have seen. 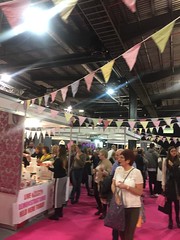 So we stayed a while, saw everything through the tumultuous crowds, and gracefully side stepped into the Trafford centre for a gawk.  We have most of the shops now in Ireland that we would have yearned for previously, so for me, the most exciting bit of the centre (after the obligatory wander around John Lewis) was the food section of the Centre.  It was EPIC.  We walked around all the Italian, eastern, fast food, pizza etc and settled on an “american” style restaurant, Coast to Coast, where I had my very first “HardShake”.  One word- fab.  Definitely going to recreate this delight in my demos once home.