There’s nothing like a leg of lamb, roasted with garlic and rosemary.

For my practical exam at the end of my Ballymaloe Course I cooked a leg of lamb with cumin, and it really was delicious, even if the leg itself was so big it threw my timings a little.  But it was so tender and full of flavour.

When you buy Irish lamb, you can be almost guaranteed that it has been raised in the near organic conditions of Ireland farming landscape.  Sheepmeat production in Ireland remains largely a traditional farming activity, where small holdings are carefully tended by farmers with a proud tradition of excellence in food production.  And this is the way it should be.

While eating in Ballymaloe House with my father in law, and my eldest, we saw Hogget was on the menu.  This is lamb from the previous season, so it is between 12 and 18 months old, and not yet mutton.  Hogget is often a much better buy due to the size of the animal at this age, and also the developed flavours in the meat.  It is also not as fatty as mutton, and therefore can be substituted easily for lamb.  It has hugely benefited from roaming freely for the extra few months, chomping on heathers, and brackens, and developing better muscle, to give a finer grain to the meat.

“The high-quality protein in hogget and mutton sates the appetite and repairs and maintains our bodies. These meats have every essential amino acid we need, along with high levels of valuable micronutrients, including easily absorbed iron to energise us, zinc to support the immune system, and B vitamins to help us think straight. Since sheep graze on green pastures, the fat in their meat is an excellent source of conjugated linoleic acid, which is heart-healthy and helps protect us against cancer.”

Ireland, in particular, has a history of sheepmeat in the diet.  But historically the meat was only used if the animal was old, or had died.  In a land where sheep were often the primary meat food source, it is not surprising that it became the basis of many traditional dishes like shepherds pie, or the Kerry pie, that was traditionally served at the puck fair in Killorgan, often this type of pie was called a fairing.  Myrtle Allen had investigated this pie over 40 years ago, when she first came across it. 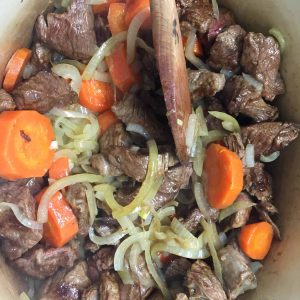 While we were learning to make these in class, Darina told us of the similarities between these pies and those made in Cornwall, and it is possible that a link goes back to the 1800s when a community of Cornish miners and their families lived in a valley near Allihies in West Cork and worked the copper mines. (Darina Allen)