When we knew we were heading to Fontconjouse to grape pick with some friends, I knew there was a fairly posh restaurant across the road.  My “good” friend Ger told stories of how they sit on the steps outside their house and drink wine while looking at all the pomp and ceremony going on inside!

Then one day I was scrolling through twitter when I happened upon an article about a very talented chef in a remote part of France who had recently received his third Michelin star.  Third.  Third.  We had only ever had experienced a one star.  So the WEEK before we were heading to this remote part of the south of France, I emailed reservations, saying to myself, well, you never know your luck.

Very polite email by return.  In my fright I read the French too fast, focussing on Fermee.  Sigh of disappointment.  Re read.  Fermee Lundi.  AHA, they are currently closed on a Monday, and will email on Tuesday. Sigh of relief and anticipation.

Next day I received an equally polite French email, saying yes they could fit us in on Wednesday at 8 O’clock. Would that suit?

Hyperness ensued, obviously my next email was to my friend Ger admitting we were going to experience the pomp and ceremony, that I just HAD to.  It would be an absolute sin to go all the way there and NOT experience the three stars.

She said they would still laugh at us, but would get over it if we didn’t mind them looking in at us too!

We were absolutely over the moon, but thank goodness holiday mode took over and we didn’t really dwell on the excitement until the day before.

We were greeted by a lovely lady who introduced us to our waiter, who seated us.

Initially we were offered an aperitif.  I went for a glass of white wine, and Nigel was offered fruit juice as he was driving.

The white wine was produced 20km from the restaurant, this we found to be a recurring theme through the evening, Giles makes a huge effort to identify and encourage producers in the locality.  Basically zero food miles.

We received our Menus, while admiring the table settings,

The glasses are beautiful and very elegant.  We were given menus, I commented to Nigel that there were no prices, he said there were! Turns out that he was given the menu with the prices, presumably as the gentleman of the table. 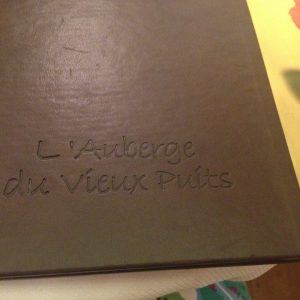 We chose the “tasting Menu” as we felt we probably would never go back, and that it was a once in a lifetime opportunity.

which we broke with a hammer

This was all very dramatic and

very impressive, a lot of effort and

thought has gone into the visual effect

This was the dish I had been reading.

It exceeded all my expectations.

I am, for once, at a loss for words, the truffle was added in copious amounts, I nearly asked them to stop as my heart was palpitating at the cost of so much truffle on my dish.

potato twirl and a pseudo cep

that was a spring roll esque with

The sabayon was added after, and was exceptionally light and luscious at the same time. 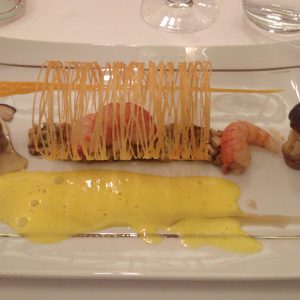 Red mullet on a potato stuffed

with veg. Served with a

saffron mousse dissolved with a

Main Course
All along it was very exciting to get our cutlery, as we had no idea what course/ dish we were getting.  This knife stumped me.  I thought perhaps game? 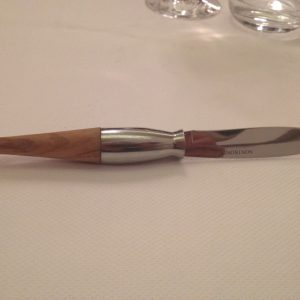 Beef, rare, served with a beef “stew” in julienne of veg, with a delicious risotto.  This tasted really amazing but was probably the “plainest” dish we had had, as there were no bells or whistles attached! 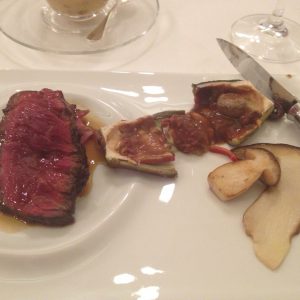 I absolutely love cheese, and actually had left some of the previous dishes to leave enough room for this course.  Tripadvisor had some comments about the enormity of the cheese course, and let’s just say, I was definitely not disappointed.

It took two people to move the trolley, if I had a criticism it would be I didn’t get enough, but I was probably too shy to ask for more in my faltering French. 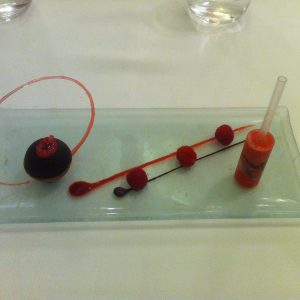 I am a big dessert fan, this was really nice,

And I’m sorry I can’t say it was anything

more, but it was beautifully presented.

It is a pity this picture is a little dark, it was

A complete work of art.  And tasted like a

On the downside, other tables got a

I commented to Nigel that it was funny to

Much to my embarrassment, our waiter overheard and commented back that the French are not so arrogant as to rename a classic! Mortified. 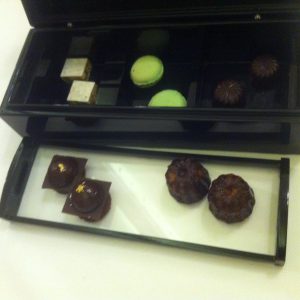 These were exquisite.  Mouth watering, not being a huge fan of macarons I was delighted to find these beautifully created morsels of heaven.

All in all I am a bit teary writing this blog.  The meal was really excellent, although I felt the service, I felt was not quite as good as Guilbauds in Dublin, it could have been because of the language barrier.

The bill was as expected, mostly.  We had been trying not to drink the water, dreading the extra cost, as when Nigel told me his fruit juice was 10 euro I nearly died, but the water was 5 euro a bottle.  I only had two glasses of wine, as from experience, too much wine and I forget the meal!

I would love to say I would go back, but really it was a once in a lifetime experience, and will remain in my memory for a long time to come I hope.