There has been alot of controversy in the media lately about pork. Rightly so.  Society due to various recessions and “modernisation” has led to cheap food produced through mass farming. And it’s not a good thing.  I always try to be as ethical with my purchases as possible.  And with pork and chicken this is essential.  Pigs are very closely related, disease wise to humans, therefore are often pumped full of drugs to prevent disease as they live so close in proximity to each other when being intensively reared.  So my point- eventually- read the label.  Do your best. This dish is crying out for some really well reared pork.  This method of cooking it in milk is an Italian classic…

Ingredients
1.5kg pork belly, skin scored, or pre slice it as I did here (makes it easier to portion)
750ml whole milk
6 bay leaves
6 cloves of garlic, peeled and crushed
1 kg of potatoes

Heat the oven to 240ºC/fan 220ºC. Season the pork all over and put it in a medium-sized roasting tin or shallow casserole dish. You want the pork to have a little space all around (about 6-8cm) in order to fit in the potatoes, but not too much or when you add the milk it won’t cover the meat enough to gently poach it. 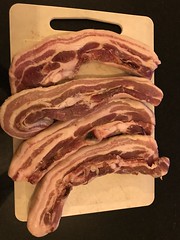 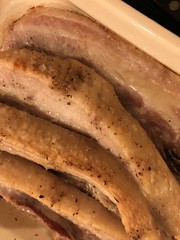 Gently pour the milk around the pork – it should come well up the sides of the meat but not go over the top of the skin. Tuck in the bay leaves and garlic cloves, seasoning with a little more salt and pepper. Put the pork back in the oven and cook for 45 minutes. 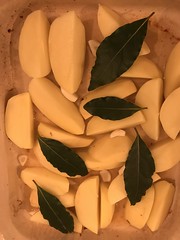 Slice the potatoes in half lengthways, then each half again, so you get 4 slim wedges. Once the pork has had its initial poach in the milk, remove from the oven and add the potato wedges, pressing them down gently so that they are under the surface of the milk as much as possible. 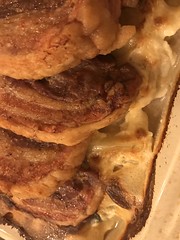 Slide back into the oven and cook for a further 1 hour, by which time the potatoes should be tender and the milk pretty much absorbed (you can spoon away any excess milk if it doesn’t all soak up). Give the potatoes a stir a couple of times during cooking to make sure they’re cooking evenly – the top layer of potatoes will develop a lovely golden crust as the milk absorbs and evaporates. 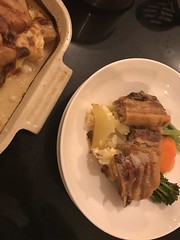 The most divine dish of pork and potatoes. Divino