Even the thought of cottage cheese makes me feel like being a little sick.  I associate it with diets and crackers.  But it’s Italian cousin, ricotta, is a lavish equivalent, with the texture of satin, and a rich sweet creamy taste.   Historically ricotta was made by taking the curds left over from cheese production (traditionally parmesan), adding an acid to them, then heating them until whatever proteins are leftover coagulate. These curds are then strained, drained, and sold. The word ricotta means “twice cooked,” in reference to this process.  Modern ricotta, on the other hand, is generally made with fresh whole or skimmed milk (for a lesser quality) to which acid is added directly. As a result, most packaged ricottas are a bit fattier and creamier than ricotta made by the traditional method. Which is fine by me.

I generally have a packet of two in the fridge, and every now and then make something using it, unusually enough, I don’t use of for cheesecake very often.  It’s either pancakes or used with pasta in our house.

At this time of year the pancake recipe usually gets dusted off… They are light and airy and eaten within minutes of coming off the pan.  I love them with a nice fruit compote (Plum and cardamon in the picture below)  And the obligatory softly whipped cream.  Other lesser cultured souls in the family spread nutella or maple syrup on them.

For the pancakes, whisk together the egg yolks, milk, vanilla, ricotta and sugar in a large bowl.  Sift the flour and baking powder together, and add this to the ricotta mixture, mix until well combined.

Heat a little of the oil in a large frying pan.  Fry spoonfuls of the mixture over a medium heat, when the surface starts to bubble, turn the ricotta cakes over using a spatula and cook on the other side for 1-2 minutes. Remove from the pan, and keep warm. Repeat with the remaining mixture, adding oil to the pan as needed.

Serve with some softly whipped cream, and some fresh fruit. 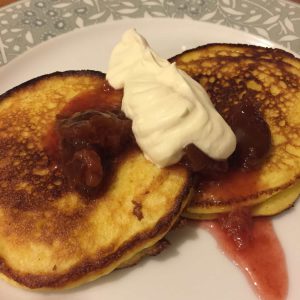