I know it sounds chic and what not- and if I’m being perfectly honest a little pretentious.  If I saw it on the menu at a restaurant, it might be one of the last things I’d consider ordering- after quinoa salad.  But it’s good.  A pretty spectacular vegetarian dish that’s easy to prepare and looks good presented on the table. 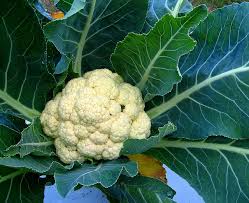 Originally from Cyprus, the cauliflower was introduced to France from Italy in the 16th Century.  Mark Twain is famously quoted as saying that cauliflower is simply cabbage with a college education.

Of course JUST cauliflower would be a teeny boring and not sufficiently colourful for me as a meal. So I added a warm sweet potato salad.

Some spices of choice- I like using garam masala, turmeric and coriander- ½ teaspoon of each

1 can of chickpeas, drained

1 avocado, peeled and sliced into cubes.

Bring a large pot of water to a boil, with a pinch of salt.  Add in the washed and de-leafed cauliflower. Simmer, whole for 8 minutes. Remove to the side after this time.

Heat a large roasting tray in the oven at 200oC.

Mix the remaining spices with the remaining olive oil, and then spoon this over the cauli.  Add it to the roasting vegetables and return to the oven for a further 15 minutes. 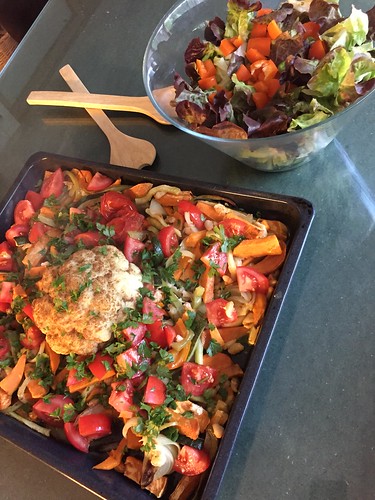