I don’t often order Seafood Chowder when I am out.  Primarily because I am allergic to Haddock, and even though there may not be pieces of haddock in the chowder itself, it may have been used to make stock. So if I have it, it’ll be homemade.

Chowder is a type of soup or stew often prepared with milk or cream and thickened with broken crackers, crushed ship biscuit, or a roux. Variations of chowder can be seafood or vegetable. The word chowder comes from the French chaudière (“cauldron”), and chowder may have originated among Breton fishermen who brought the custom to Newfoundland, then it spread to Nova Scotia, New Brunswick, and New England. The standard New England-style chowder now contains fish or shellfish, salt pork, onions, potatoes, and milk. Manhattan-style chowder replaces the milk with tomatoes. This is actually disputed as being a true chowder because of the absence of milk or cream. Eighteenth-century chowders were more varied; meat or poultry chowders were made, and wine, spices, herbs, cider, and other flavourings were often added. 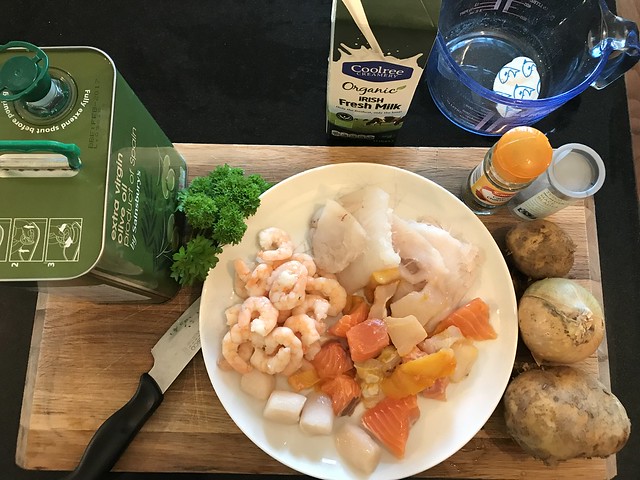 Method
Heat the oil in a large saucepan over a medium heat, then add the onion. Cook for 8-10 mins until the onion is soft. Stir in the flour, then cook for a further 2 minutes. 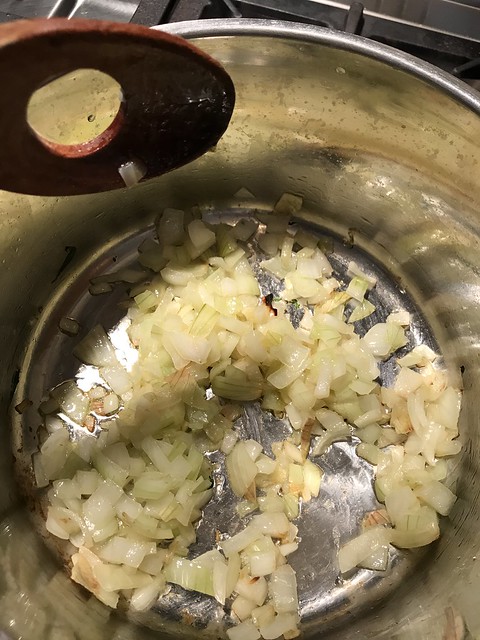 Pour in the fish stock and bring it up to a gentle simmer. Add the potatoes, cover, then simmer for 10-12 mins until the potatoes are cooked through.

Add the mace, cayenne pepper and some seasoning, then stir in the milk.
Tip the fish mix into the pan, gently simmer for 5 mins. Add the cream and shellfish, then simmer for 2 min more. Check the seasoning. Sprinkle with the parsley and serve with some crusty bread. Divine.