Sometimes only the French can make something so simple sound so elegant. This tarte bourdaloue au chocolat. is, in essence a chocolate French Pear tart.  But that doesn’t sound so posh now does it??

2 tins of pears in syrup

If possible poach the pears one day ahead, to allow them to cool down and work with them more comfortably. Simply boil the water and the sugar, stirring to dissolve the sugar.  Add the pears and raspberries to the boiling liquid. Turn down the heat until you have a very gentle simmer. Poach until fork tender, 15-20 minutes. Leave to cool in the poaching syrup. 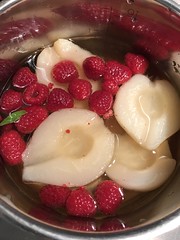 And now for some more French:

Prepare the pâte sucrée, I am always inclined to use the “sablage” method rather than the “creaming” method, but you can do either to your preference. For the sablage, I use my mixer to mix the flour and cocoa with the butter, until it resembles breadcrumbs.  Then, add the sugar and pinch of salt and add the egg, then the iced water little by little to get a rough dough that barely comes together. Dump all into a work surface and without kneading bring the dough together.

More French…..There’s a technique called “fraisage”, which is a means of mixing the dough to make it homogeneous without developing the gluten in the flour. This is done by spreading it on a work surface, a small piece at a time, using the heel of your palm. This surrounds the butter around the flour and ensures that you don’t overwork the dough, keeping the resulting dough tender and not elastic. Making for a superior tarte.

Once it all comes together, shape into a flattened disc, so it cools sooner and it is easier to stretch later. Rest in the fridge for at least 30 minutes (if longer, better, you could do this the day before, as well).

Next: the almond cream, beat the soft butter with the powdered sugar, a pinch of salt and the vanilla. Add the beaten, room temperature eggs slowly or it will split! (adding cold liquids to a solid fat, such as butter, is not a good idea! )Then, add the ground almond. Last, add the sifted flour and cocoa.

Carefully add the almond cream, , starting from the centre, spreading out. smear a 1 cm layer of cream through the base as consistently in thickness as possible. 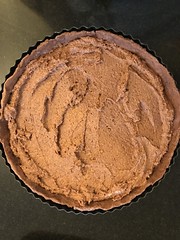 Strain the pears, and cut along their width in fine slices.

Arrange over the almond cream in a star pattern (if you make a larger tart, simply arrange more pear halves). I like to add some sliced almonds around too, but that’s optional.

Place back into the oven for 30-40 minutes until golden and slightly risen. And there it is, the beautiful tarte bourdaloue, simple sprinkle some icing sugar around the sides or over the frangipane. Divine.