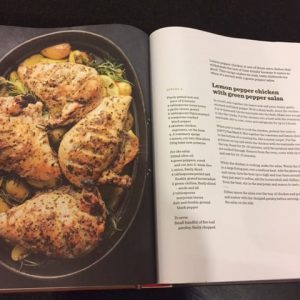 Sometimes looking through cookbooks for recipes can be fun.  Other times you see a recipe that you REALLY want to make, but don’t have the ingredients… and couldn’t be bothered heading out especially to get them. This was my case here. I liked the look of the picuture of this dish  and  wanted to try it. 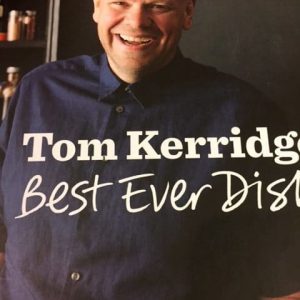 I’ve been a Tom Kerridge fan for a long time.  And he’s on my places-I-want-to-eat-in-the-next-24-months list. Sooner if I can.  I love his use of ingredients.  In this case the green pepper salsa was intriguing.  I feel the green pepper is the least interesting or edible of all peppers.  I never eat it in a Chinese takeaway, I personally think of it as the bitter relative. Of course the other problem was that I had no green peppers.  Just red ones. 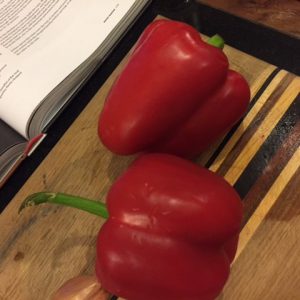 So I got to work sorting out what ingredients I had, and had not got.

Lemon (yup- but not particularly fresh) √

Honey (not runny though) √

No green peppers, no fresh herbs.  Fresh herbs are rare enough at this time of year, and my shopping budget doesn’t run to buying fresh herbs for a day to day meal.  Therefore the ole herb de provence was called into play. And I just subsituted the red peppers for the green.  BUT I got distracted- and the peppers took on more colour than I hoped.  So I added some creme fraiche to make a creamy sauce instead.

Note to self: don’t get distracted. Hmm.  Easier said then done.

It’s a beautifully simple dish to assemble.  And you could, if you are more organised than me, marinade the chicken in the morning, or the night before.  And apart from the perfunctory chopping, there’s not much manual labour.

The result was very tasty indeed.  I think because I was using a non- runny honey it was less licky and thus caramelised a little- but then as Rory O’Connell always says- colour is flavour…